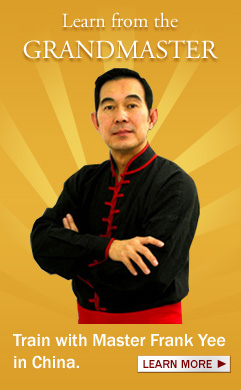 There are two ways to use this. First, pose the chin ji gwun ready position by raising the pole upwards. From this position I can immediately strike down with chin ji gwun or strike to any opening on the opponent.

The second way to use this technique is to raise the pole, leaving the middle, lower left gate, and left hand open to bait the opponent into attacking through that gate. When the opponent attacks with the shooting dragon pole (Biu Lung Gwun) or under the armpit thrust (Gaap Dai Gwun) (Pic. 2) to attack my left hand or lower left gate, I lean toward the right to stay away using a Cat Stance (Pic. 3) and strike down with the left hand pulling back and the right hand strikes down with chin ji gwun to hit the opponent’s head at an angle (Pic. 4).

When I am doing the Sowing the Red Banner movement, I’m trying to attach the opponent’s upper gate; doing so leaves my middle and lower left gate open. When he tries to take advantage of my open lower gate, I have to stay calm to anticipate his movement (if my opponent does not move, I do not move); if he moves, I arrive first/hau faat sin ji). My movement finishes the confrontation in one move, by staying away from his strike and striking at the same time. My strike must be fast like lightning or a shooting star, finishing the opponent with one move.

Sau Ban Dan Gwei translates to “holding the herb with both hands” (Pic. 5). It is also called Blowing the Flute Pole “Choi Siu Gwun,” also Carrying Pole or “Dom Gwun.” While I use the middle flat pole and the opponent tries to go to my left side and use a lateral sweeping pole (“Sweeping 1000 Soldiers”/Wang So Chin Gwun) to attack my chest/left hip (Pic. 6), I have to move my right foot to my right, moving my body to the right to stay away from the attack. I then use Sau Ban Dan Gwei to hit the opponent’s front hand from under his pole (Pic. 7).

Besides this technique, the Water Dripping Pole (Dik Soy Gwun) and the Monkey Pole (Hau Ji Pang) are other techniques we use to attack the opponent’s lead hand.

Philosophy: To use the soft to absorb hard (Yi Yau Fa Gong); from the “dead pole” to “live pole” exchange.

When both opponents are using the middle flat pole to face each other (Pic. 8), the opponent uses the Waving the Banner Pole (Yiu Kei Gwun) and covers my pole to knock and press it down (Pi c. 9-10). Before he attacks, I go with his movement, moving my pole towards the ground; sinking the front end of my pole down to go with his power. At the same time my right foot moves to my right and my left foot moves forward in a left bow and arrow stance to get close to my opponent’s right side, then I use the Upside Down Piercing Pole (Do Charp Mui Fa Gwun) to attack the top of the opponent’s foot in a piercing fashion (Pic. 12).

When two poles cross, the one on top is called “live pole” and the one on the bottom is called “dead pole.” The “live pole” position has more freedom, but if my pole is in the “dead pole” position, then my opponent controls my pole. When we use the Do Charp Mui Fa, and my opponent uses the Waving the Banner Pole (Yiu Kei Gwun), my pole is on the bottom and his is on the top, therefore I cannot freely attack him. He can use the “hitting the snake” pole and slide up my pole to attack my hand, or the Killing Pole (Saat Gwun), also known as Chin Ji Gwun, or the Phoenix Nodding the Head (Fung Din Tau) to attach my head. This means that I must force by sinking the end of my pole down, and at the same time raise my left hand to form the Lateral Angle Pole to lock my opponent’s pole, turning his pole into “dead pole” and mine into “live pole.” My right foot moves to the right one step and my pole pushes his pole. My pole end is already pointing at my opponent’s foot. Now I use the Inverted Plum Blossom Pole (Doo Charp Mui Fa) to pierce the top of his foot. This technique is also called the Iron Cow Plows the Field (Tit Gnau Gang Dei).

Back to News & Media